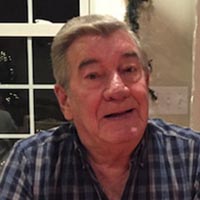 Wesley “Junior Combs, 72, of Elliston, Va. passed away on Saturday, November 30, 2019 at Lewis Gale Montgomery Regional Hospital.
He was born on December 19, 1946 to the late Wesley B. and Ivory Montgomery Combs in Anawalt, W. Va.

Following graduation from Andrew Lewis high school in 1965, he was drafted in the U.S. Army where he would faithfully serve his country during the Vietnam war as a Military Policeman. He was honorably discharged several years later and became employed with Norfolk Southern Railroad where he spent the next 40 years of dedicated service before retiring.

When he wasn’t working, you may find him gardening, playing bluegrass music, or possibly watching a good race on Sunday afternoon. Of course, Friday nights were reserved for social hour at the Moose Lodge. Junior was a very sociable and likable fellow. He wouldn’t hesitate to give you the last shirt off his back. Above all, he will be remembered as a loving husband, father, grandfather, and friend to everyone he met. He will be missed!

In addition to his parents, Junior was preceded in death by two sisters, Janice Burton and Shelby Hall; and his grandson, Bryan Woolwine.

The family will receive friends on Thursday, December 5, 2019 from 5 until 7 p.m. at John M. Oakey & Son Funeral Home in Salem.
Funeral services to honor Junior’s life will be conducted on Friday, December 6, 2019 at 2 p.m. in the funeral home chapel with Pastor Roy Kanode officiating. Interment with Military funeral honors will follow at Sherwood Memorial Park.

Condolences may be expressed by visiting www.johnmoakey.com