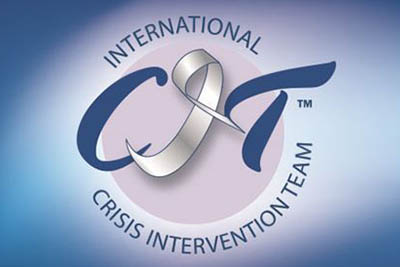 Patrick Halpern of the New River Valley Crisis Intervention Team (CIT) and CIT Coalition Board President, was awarded the CIT Advocate of the Year Award by CIT International at their annual conference which was held in Phoenix, AZ Aug. 16 – 18, 2021. There were 1085 attendees representing law enforcement, behavioral healthcare and advocacy.

The CIT Advocate Award recognizes a family member or other community advocate who demonstrates exemplary active involvement with their CIT program. They must have been instrumental in getting CIT started and/or promoting CIT as an engaging program that elevates the identity and ownership of CIT as a Community Program. This person always speaks boldly of issues specific to mental illness stigma and advocates for access to high quality care services for people who live, struggle and cope with mental illness.

Mr. Halpern joined the New River Valley’s Crisis Intervention Team program at exactly the right moment. The team had been in operation for a little over two years and would soon be a focal point of analysis following the Virginia Tech mass shootings in 2007. With Halpern’s mentorship, the team would learn a great deal from the experience – what was working well as a community program and what needed improvements moving forward. With his stewardship the small team from the New River Valley would teach the rest of Virginia how Crisis Intervention Team programs could transform emergency mental health responses. As the President of the Virginia Crisis Intervention Team Coalition, Halpern has helped steer emerging code changes at the state level and today is a guiding member of the Virginia Governor’s Taskforce seeking to bridge the gap between emergency mental healthcare and social justice reform.

Crisis Intervention Team (CIT) program is a community partnership of law enforcement, mental health and addiction professionals, individuals who live with mental illness and/or addiction disorders, their families, and other advocates. More information is available at www.citinternational.org