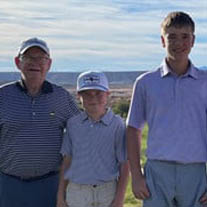 Daniel P. Caldwell, 79, of Christiansburg known to those around Southwest Virginia as “Uncle Danny”, and on North Carolina ballfields as “Grandaddy”, passed away on September 28, 2022 peacefully and valiantly at his home in Christiansburg, VA.

He was eternally proud to be a father and grandfather to his “little buddies”. Danny was a 1961 graduated and hall of fame member at Narrow’s High School, and a proud green wave. Danny was a veteran of the US Army, where he performed his service to the country as a paratrooper in the 82nd Airborne Division. He retired as a Train Master from Norfolk Southern, where he mentored and helped many start their career. Uncle Danny was an official with the VHSL for over 42 years, forming lifelong friendships and calling games at the highest level in the state including multiple State Championship games. Danny was an active member in the AA community for over 48 years, rarely missing a meeting. Upon his death, he would now consider himself a “recovered” alcoholic. He was a Mason and loved all things Virginia Tech. Grandaddy would often be found pacing the ballfields of his beloved grandsons, a trait he became well known for as he watched his son perform years before.

Daniel was preceded in death by his parents, L.P. & Frances Caldwell; and sister, Judith C. Frazier. He is survived by his son, Robey Caldwell; grandsons, Jackson & Reed Caldwell; son, Benjamin Caldwell; daughter, Tammy Hamilton; brother, Jim Caldwell and wife, Linda; sister, Eleanor O’Connor; and many nieces and nephews which all loved him dearly.

Uncle Danny had so many friends around the community, of which he held dear to his heart, that there were too many to name. A special recognition goes to the members of Good Samaritan Hospice, specifically his nurse Cherish Thompson and aide Morganne McDowell, whom worked with him in his final months to ensure he passed gracefully and with dignity.

The family will receive friends on Friday, September 30 from 4 to 7 p.m. at Horne Funeral Home. Funeral services will be on Saturday, October 1 at 11 a.m. Interment will be at Birchlawn Memorial Gardens. Graveside services will take place next week due to the impending weather. Please check back on Monday.

Donations can be sent to: