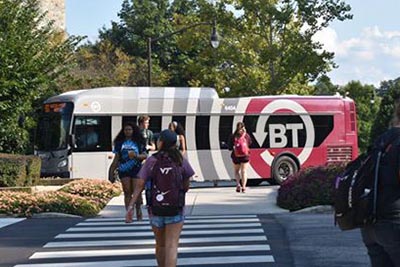 Blacksburg Transit has earned the American Public Transportation Association’s 2019 Outstanding Transit System award for North America. This top award in the transportation industry is awarded each year to a system that excels in overall performance as an organization and benefit to the community. BT earned the award in the small urban system category characterized by annual ridership of four million or less. This category not only includes all bus systems in North America but also rail transportation systems as well. Described by APTA, the award represents “the ‘best of the best’ of the public transportation industry… whose accomplishments have greatly advanced public transportation.”

BT was singled out for their successful delivery of service to Virginia Tech, Blacksburg and Christiansburg based on performance on 24 quantitative and qualitative criteria. Per Tom Fox, BT Director, “We’ve had unprecedented ridership growth of 22 percent over the last three years when most systems in our industry are facing declines. Through employee dedication, innovation and the support of our stakeholders we’ve taken the organization to new heights while never compromising our high standards.”

“Congratulations to the entire Blacksburg Transit team for being named Outstanding Transit System of the Year for 2019,” said Paul P. Skoutelas, President and CEO of the American Public Transportation Association. “Blacksburg Transit has demonstrated creativity and innovation in all aspects of their system, from expanding options and growing ridership to delivering effective and efficient services. In winning this prestigious award, Blacksburg Transit is a model for public transit systems across the nation.”

The award will be presented at the APTA Annual Meeting in October.