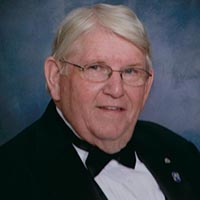 Frank Genues Bond, 76, of Roanoke, VA, passed away on Wednesday, November 6, 2019 at Lewis Gale Medical Center. He was born on August 5, 1943 to Hobart Genues and Beulah Neal Bond. Frank graduated from Pulaski High School in 1961 and later moved to Roanoke where he worked as a Highway Construction Inspector with VDOT and VA Asphalt. Frank was an active member of Melrose Masonic Lodge No. 139 AF & AM for 50 years and served as the Worshipful Master in 1976.

A funeral service will be held at 2:00PM on Sunday, November 10, 2019 at Oakey’s North Chapel with Dr. Chris Cadenhead officiating. Entombment will follow at Blue Ridge Memorial Gardens with Masonic Rites by Melrose Masonic Lodge. The family will receive friends on Saturday from 2 to 4PM and 6 to 8PM at the funeral home. The family suggests memorials be made to the Masonic Home of VA or the charity of your choice.