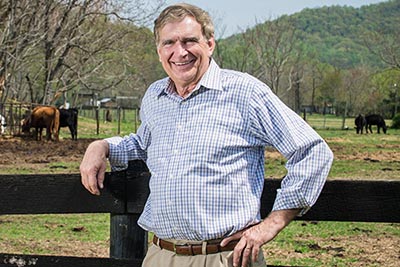 Republican State Senator Emmett Hanger, a longtime leader in the effort to stop gerrymandering, announced today the formation of Virginians for a Better Tomorrow (VABT).

“Our only chance to put citizens first, instead of politicians, is to pass the Constitutional Amendment that creates a bipartisan, citizen-led, Commission to draw new districts,” Senator Hanger said. “I helped lead the effort in the legislature to advance this to the ballot, and now I want to finish the job by making sure it passes.”

The Constitutional Amendment would establish a bipartisan group of both citizens and legislators to draw new district lines in a public process. If the resulting plan is rejected by the legislature, the Virginia Supreme Court will draw new lines.

Hanger noted that a bipartisan citizen group, One Virginia 2021, has been a significant force behind getting this initiative on the ballot. Hanger indicated that he was honored to have been chosen by this group to carry their legislation in 2019 and that even though the legislature passed an alternative bill that, in his opinion, was not as good as the one initially proposed, it is so much better than our current system that it would be foolish for citizens not to support it on the 2020 ballot.

Hanger intends for his efforts to be coordinated with and supportive of efforts currently underway by One Virginia 2021, Fair Maps Virginia, and other groups that are promoting this effort to return power to the people.

Senator Hanger continued, “The right to have fair and equal representation is the basis of representative government. Voters should choose their elected officials, not elected officials choosing their voters. Virginians for a Better Tomorrow will work on a broad range of issues, but our first project is to pass the Constitutional Amendment by raising money and recruiting volunteers to educate voters. We are inviting all Virginians to join us by going to our website: virginiansforabettertomorrow.com.”

Virginians for a Better Tomorrow has been organized by Senator Hanger as a political action committee. “Our mission is to bring Virginians from many backgrounds and points of view together to create common-sense solutions to the problems we face and build a better Virginia,” Senator Hanger stated.

State Senator Emmett Hanger, named in 2018 as one of the 10 most effective legislators in America, has represented Virginia’s 24th District since 1996 and has been a leader in the fight for redistricting reform. He also serves as Co-Chairman of the Commonwealth Caucus (A bipartisan group of legislators that support common-sense solutions for all Virginians) and was named the Most Effective Legislator in Virginia in 2017 and 2018.​