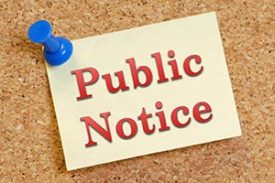 Recognizing the prevalence and impact of mental illness within the criminal justice system, Montgomery County will begin a General District Court Behavioral Health Docket in late April. The program’s goal is a reduction in incarceration and recidivism of people with serious mental illness who commit minor, non-violent misdemeanor offenses such as trespassing or shoplifting.

Including Montgomery County, only 10 jurisdictions in Virginia have active Behavioral Health Dockets. This is the only Behavioral Health Docket in the New River Valley. Approval and training by the Virginia Supreme Court is required prior to establishing the specialty docket. Montgomery County completed training in December 2019 but due to the pandemic approval and implementation of the program was delayed until this spring.

The Behavioral Health Docket is a post-conviction program. Participants have been convicted of a crime but rather than serving additional jail time or being placed on traditional probation, they can volunteer to participate in the Behavioral Health Docket. While on probation, participants will receive intensive mental health treatment and community support as they stabilize and reintegrate into the community.

Participation is voluntary. The length of the program is 12 months. During the initial pilot program up to 5 participants will be served with an ultimate target over time of increasing participation to a maximum of 20 participants.

Stakeholders in Montgomery County have focused on the issue of individuals with mental illness in the justice system for almost 20 years. Beginning with the Crisis Intervention Team (CIT) program implementation in 2004, which encourages diversion of individuals with behavioral health disorders by law enforcement officials, the community’s efforts also include the Bridge Program which is a post-booking diversion program and the Drug Court operated in the County’s Circuit Court. Over the years, considerable progress has been made in diverting people with mental illness away from the justice system through the implementation of CIT assessment sites, which provide an alternative to arrest for individuals in mental health crisis.

Despite these successes, there are still too many individuals with mental illness ending up in jail. Based on Montgomery County Jail booking data, information reported by the jail to Virginia’s Compensation Board, and NRVCS’ electronic health records, over the past three years 18% of individuals booked at the jail have a serious mental health disorder (psychosis, bipolar disorder or post-traumatic stress disorder).

Many arrestees arrive at the jail with a serious mental illness, and jail staff, along with their partners from NRVCS, are called upon to provide mental health stabilization and treatment for inmates. This is a task for which jails are neither designed nor staffed to deliver as effectively as community mental health services.

A large number of people recycle in and out of the Montgomery County Jail multiple times per year on minor, non-violent offenses. In addition, people with a mental illness who are released from jail often fail to successfully access community treatment services.

This failure to stabilize and successfully access community treatment options often results in new arrests, once again stressing the financial and personnel resources of the criminal justice community. The intensive treatment and supervision of the Behavioral Health Docket is designed to reduce this recidivism.