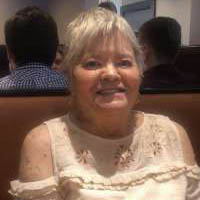 Donna Jean Munsey Bain of Vinton, VA departed this life to be with her Heavenly Father on October 24, 2020 at her home. Born August 9, 1943, she was a daughter of the late Oren Munsey and Rubie Hopkins Munsey Clear.

Donna enjoyed her time recently retiring from Precision Fabrics. Known as Honey to her grandchildren, she felt the most joy watching them grow and become successful adults. Honey loved the outdoors and spent much of her time gardening and landscaping her yard. Donna often watched cooking shows and would mimic recipes to share with her family. You would often find numerous boxes on Honeys porch or receive gifts from her in QVC boxes which was her favorite place to shop.

There will be a graveside service held Monday, November 2, 2020 at 2:00 PM in the Hamblin Cemetery in Bear Springs, VA with Pastor Shahn Wilburn officiating. The family will also celebrate Honey’s life at later date and time. Online condolences may be sent by visiting www.kendallfuneralhome.com.

The staff of Kendall Funeral Home are honored to be serving the Bain family.