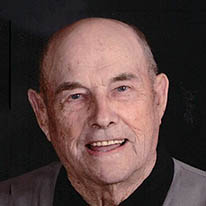 Warren Lee Atkins, Jr, “June”, of Maybrook, Virginia, passed away on Wednesday May 11, 2022 at the age of 101. June passed peacefully in the loving care of his family in his home on the land he lived his entire life.

June was born August 23, 1920, the fifth child of nine, eight sons and a daughter, born to Warren L and Blanche (Williams) Atkins. June never received a high school education, leaving school after the seventh grade to help support his family after his father’s death in 1929. At age 22, June entered the 2nd World War as a Private First Class in the 790th Military Police unit serving across Europe. June was proud of his service to his country serving alongside five of his brothers.

Shortly after returning from the war, he met the love of his life, Dora Dillman, on a blind date. The two were married on June 8, 1946 in Pearisburg, Virginia and were four weeks shy of celebrating their 76th wedding anniversary. Together, they had two children, five grandchildren, and six great-grandchildren.

June worked for Kimbalton Lime Plant for 32 years and the Town of Christiansburg for 6 years before retiring to become a full-time cattle farmer with his brother, Curtis until 2003. June and Dora were lifelong members of Lucas Memorial Christian Church before it’s closing and then Mt Lebanon United Methodist Church.

June enjoyed spending time with family and friends and often would be seen sitting on his front porch waving at family and friends as they passed by the house. He will be remembered by many as a kind, loving man, one who never met a stranger, always had a smile with a twinkle in his eye and ready to tell a story or joke. A true member of the greatest generation, he will be missed by many.

Visitation with family will be at Kendall Funeral Home in Pembroke, Virginia on Saturday, May 14, 2022 from 12:00 PM until 2:00 PM with funeral services to follow in the Chapel with Pastors Shahn Wilburn and Joe Walker officiating. Funeral services will conclude with a graveside service with military honors in the Garden of Angels at Birchlawn Burial Park in Pearisburg, Va.

The family would like to thank Good Samaritan Hospice for their care and guidance with special thanks to Lynn and Miranda.

A guestbook is available to share condolences and sweet stories of June by visiting www.kendallfuneralhome.com. The staff of Kendall Funeral Home are honored to serve the Atkins family.