An Astounding Red State Sweep in Virginia…Now What? 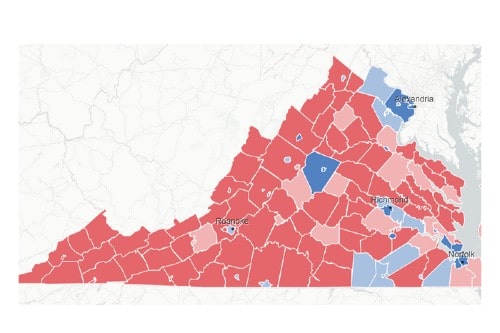 We did it, Virginia. By the Grace of God, by a well run campaign on the part of the Republican Ticket, and let’s not forget, by a motivated and determined base of active conservatives, and even those undecided folks that we refer to as “Swing Voters”.

But let’s be honest. We owe a debt of gratitude to a few others.

Terry McAuliffe
Terry, without your sincere honesty when it comes to parents in the classroom, and how our children are educated, we never would have been able to glean as many of those suburban moms from the democratic ticket. That was simply wonderful… Thank you for that. But probably more so, we should be thankful that your campaign actually doubled down on that nonsense.

And the incident with the Lincoln Project folks. I thought that was cute. It actually made me wonder… What if we went back and revisited the folks with the Tiki Torches at the so-called “Unite the Right” rally in Charlottesville, 2017. Would we find some leftist activists in that bunch? I mean, Jason Kesseler was one of the organizers. He was previously a leftist activist, and supporter of Barack Obama. Are we to really believe that he just up and switched teams? Maybe, but I digress.

Chris Hurst
What can I say about Chris Hurst, but Thank You! Thank you for throwing your campaign into the garbage. Seriously, I could scarcely believe my eyes Tuesday morning when the reports started coming in about you, driving on a suspended license (what’s that all about, anyway?) on the eve of the election, pulling up political signage of the Republican Party. The bodycam footage of the officer letting you have it was priceless. (If you readers haven’t seen that, please do. It is a full on belly laugh, unless you’re a Hurst supporter. In that case, it should be an eye opener, and a cringe-fest.0 Democrats really do seem to believe that they are above the law.

This was on the heels of the very disturbing event that took place on January 28, 2020, was a startling view into the privilege that the left seems to carry on about so often… You know, Rules for thee, but not for me… Had I gotten pulled over on suspicion of DWI, only to fail a breathalyzer, I am sure that I would still be paying for it. But this does beg the question. Why is Chris Hurst’s license currently suspended? All he got for his shenanigans in January, 2020 was a citation. What else has he been up to that hasn’t been reported? His record ends in 2017, for which he seems to have had a history of not keeping his registration up to date (it happens) and he seemingly speeds a lot. It’s the speeding and drunk driving that worries me. But somewhere along the way, they took his license to drive away.

Princess Blanding
I’m not really sure how many votes that she took from Terry, but I am glad that she ran. Something to the tune of .7% of the vote went to her, and I think that helped, even if it was just a little. To me, it shows a solvent dissension within the democratic party, and I think that will only grow over time. So, I am not being sarcastic when I say, Thanks Princess! We appreciate your efforts to divide the left.

Those are the big three that I can think of. Certainly, the GOP Statewide Ticket worked their tails off. My favorite on the trail was Winsome Sears, if for no other reason, because her sound pro second amendment stance resonates with my soul. But her story of migrating lawfully to our country is a testimony to the America that I have come to love.

But Now What?
You’re probably thinking that all is well in the world. Don’t. Don’t do that. Not even for a moment, don’t believe that things are going to be ok. We have MUCH more work to do. Getting complacent now will bring nothing but pain in the upcoming midterm elections, and the similarly important local and state senate and delegate elections of 2023.

I reside in Floyd, and we have a lot of work to do there. We have Supervisors Linda DeVito in Little River, and Lauren Yoder in Locust Grove to consider candidates for. DeVito is a straight up liberal democrat, and she makes no bones about it. Lauren Yoder is a softball Republican (we prefer the term RINO, everyone knows it), who seems to have checked out of the supervisors position, while claiming that he has no intention of seeking re-election in 2023. Lauren’s most used phrase is “I haven’t read up on that matter”, something that he seems to frequently say at regular BoS meetings. We hope that you find green pastures, and that you stay out of the political arena Lauren.

Floyd also has 2 seats up for reelection on the Town of Floyd Clouncil. David Whitaker, the sole conservative on that council, and Mike Patton, democrat lackey for the Walls of Floyd. The town basically exists to further expansion of the Wall’s economic dreams of funding campaigns to get and keep liberal democrats elected. And that is what is on the line. The goal is to grow the town of Floyd, attracting more and more liberal businesses, with the intent of increasing campaign funding for democrat candidates. This has been going on for some time…

80 grand doesn’t seem like that much money, when you consider how much money is in politics. But for this small county, it’s kind of a big deal. So if you’re wondering “what’s next?” this is it. Liberal businesses need to be cut off from 2 sources of income: conservative customers and government grant money. The only way that this happens is if we cut the democrats (Linda DeVito and Lauren Yoder) out of the Board of Supervisors, and we support David Whitaker for Town Council, and replace Mike Patton.

We also have to determine what becomes of the redistricting currently taking place. According to State Senator David Suiterline, democrats at the state level have basically walked out of any and all talks regarding redistricting. This would ultimately mean that judged will be getting involved, and we currently have Democrat Judge Mike Fleenor at the head of our district. We’ll have to see how that goes. So Stay Tuned.

We also need to defend Congressman Morgan Griffith and his 9th Congressional District seat. The midterms are upon us, and this is where we get to change things Nationally. Here, we hold the line, but if no one challenges Morgan for his seat, (I hear Nick Rush is looking for a job, and he showed his backside lately as just a little too cozy with the establishment) then we need to be looking to how we can help OTHER districts defend conservatives, or take out democrats.

But this is where we are as of now. The fight is FAR from over. This election cycle, we won big at the state level, but made no perceivable progress locally, and this will be more important in some ways… as I mentioned, the local government is liberal business friendly, and means more so-called “progress” for Floyd County.

If you are on the sideline after this past election cycle, it’s time to get on the field. Consider running for office, running for position in your local party committee, contributing financially, or otherwise, find a way to help. This is basically the end of the rope. The climb back to the top is terribly long. I have to believe that we can do it, because if not, America is over. Is it over? Can you help save Her?