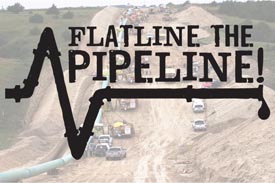 Activists from Food & Water Action, Our Revolution and Mothers Out Front will rally at the Northern Virginia gubernatorial debate happening September 28 at 5:30PM in Alexandria. The gubernatorial debate at the Rachel M. Schlesinger Concert Hall and Arts Center Northern Virginia Community College Alexandria Campus is the second meeting of Youngkin and McAuliffe, both vying for the top elected position in Virginia.

Activists will picket the event demanding candidates pledge to stop the controversial Mountain Valley Pipeline project from polluting Virginia’s waters and contributing climate-warming greenhouse gases to the worsening climate crisis. Activists will also urge candidate commitments to reforming Virginia’s Department of Environmental Quality (DEQ). The agency’s negligence has been at the heart of controversy around MVP key water permits, with recent news breaking of agency pressure to steal authority from a citizen board tasked with voting on an upcoming water permit in December. The move came despite Environmental Protection Agency warnings about the “significant degradation of the waters” the project would impart, moving them to recommend denial of another similar water permit.

The fight to stop the fracked gas Mountain Valley Pipeline has been ongoing for seven years, widely opposed by environmental organizations, and thus far unobstructed by Virginia elected officials. Neither candidate for governor has yet taken a stance on the controversial fossil fuel project, which would emit 90 million metric tons of greenhouse gases — the equivalent of adding 23 new coal fired plants onto the grid.

As Governor, McAuliffe’s administration approved the project, despite public outcry, and his campaign has yet to speak to his current position on the project. Youngkin, meanwhile, has remained silent on climate change entirely, suggesting in the candidates’ first debate that Virginia should walk back its existing clean energy commitments in the Virginia Clean Economy Act.

“Any candidate for Virginia’s next governor must commit to moving our state off the fossil fuels that are destroying our environment, health, water and climate,” said Jolene Mafnas, Virginia Organizer with Food & Water Action. “Mountain Valley Pipeline is inconsistent with the steps our state and nation need to take to avoid climate catastrophe and protect our waterways. Virginia’s next governor must pledge to stop the Mountain Valley Pipeline and curb our reliance on fossil fuels.”

“With pipelines, it’s not a matter of debate if the pipeline will crack or break, but when,” said Our Revolution Virginia State Organizer Kristin Hoffman. “Virginians deserve clean water and unpolluted soil. And this construction has dramatically impacted our rural communities. Our Governor must represent all Virginians, not just the wealthier, urban areas”

“A newly released study has shown that if we continue on the current trajectory of greenhouse gas emissions, our children will “live through roughly three times as many climate disasters as their grandparents,” said Mothers Out Front Virginia Senior Organizer Tiziana Bottino. “The Mountain Valley Pipeline would be responsible for emitting the same amount of greenhouse gases as 26 US coal plants or 19 million passenger vehicles per year. Methane gas also causes a myriad of adverse health impacts, especially on young children’s lungs. We can’t afford to continue investing in fossil fuel infrastructure and borrow resources from our children’s future; the time to invest in renewable energy is now.”