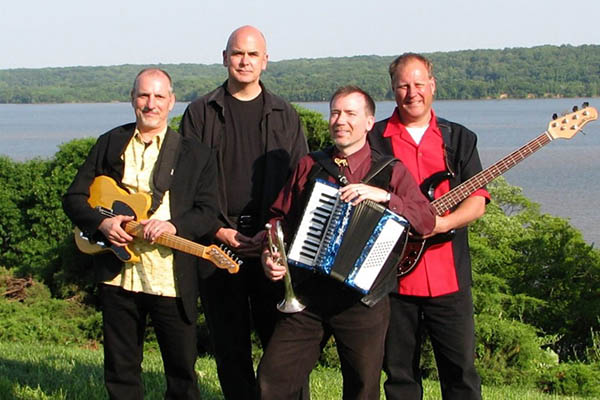 Summer Arts Festival presents Dixie Power Trio Friday, July 9 from 6 p.m. – 7:30 p.m. on Henderson Lawn In the event of inclement weather, this event will be canceled.

The Dixie Power Trio is a four-piece group dedicated to the music and sounds of Louisiana. Formed in 1992, the band (led by tuba/bassist Andy Kochenour and cornet/accordionist Zack Smith) has spent the last decade performing for audiences in clubs, concerts, and schools. The group is based in Fredericksburg, Virginia and has toured extensively throughout the United States in support of their eight independently produced recordings.

In a typical set the DPT will play a gumbo of different styles including zydeco, Cajun, New Orleans jazz, funk, street parade, and rock. The songs are a mix of Louisiana-flavored originals and covers—all with a unique, happy-go-lucky attitude.

The band’s music has been featured on NPR’s “All Thing’s Considered” and on several WB television shows. Over the past few years the DPT has shared the concert stage with many Louisiana music luminaries including Wynton Marsalis, the Neville Brothers, Dr. John, Terrence Simien, Chubby Carrier, the Dirty Dozen Brass Band, the Olympia Brass Band, and Beausoleil.

Friday Night Outdoor Concerts on Henderson Lawn are presented by Virginia Tech and the Town of Blacksburg as part of the 2021 Summer Arts Festival. All events are free. For more information, contact Jane Harrison at eharriso@vt.edu.