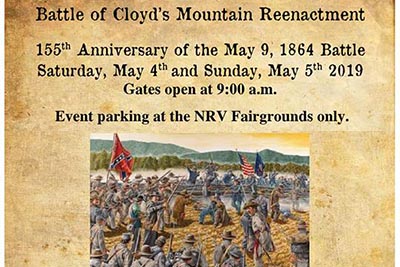 New River Rifles, Incorporated presents the 155th Anniversary Battle of Cloyd’s Mountain Reenactment on Saturday, May 4, 2019 and Sunday, May 5, 2019 with parking and bus transportation at the New River Valley Fairgrounds in Dublin, VA.

This reenactment will be held on the original battlefield property at 2:00 pm on both Saturday and Sunday. Events will include period camps, infantry demonstrations along with first person interactions with 19th century living historians. The camps will be open to the public as well.

Transportation to the battlefield is included with ticket purchase.

Facts About Battle of Cloyd’s Mountain:
• The most significant battle in Southwest Virginia, fought in Pulaski County
• Took place May 9, 1864, between Union forces under General George Crook and Confederate forces under General Albert Jenkins
• Future Presidents Rutherford B. Hayes and William McKinley both fought at Cloyd’s Mountain
• After an hour of some of the most intense fighting of the Civil War, Union forces prevailed and the Confederates withdrew

For more information about the event, visit: our Facebook page or our event page.