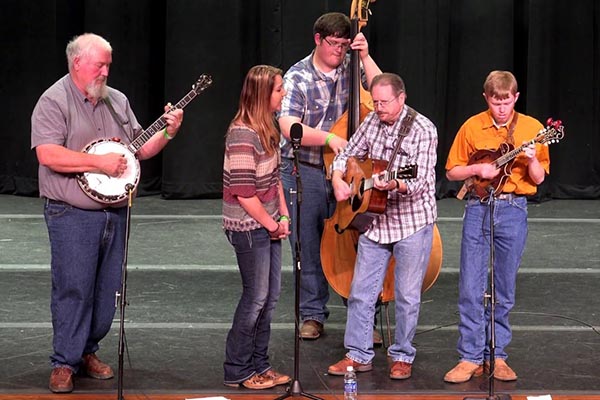 The music of Adam McPeak & Mountain Thunder and New Macedon Rangers will be featured during New River Community College’s Fiddle, Banjo and Dance Club jamboree on Saturday, Dec. 14. Music will begin at 6 p.m. in 117 Edwards Hall at NRCC in Dublin.

The band Adam McPeak & Mountain Thunder is composed primarily of young bluegrass musicians from Virginia, with mandolin player Adam at the helm. The band includes Mike McPeak, Adam’s father, who plays guitar and sings lead and harmony vocals; Lindsey Jackson who sings lead and harmony vocals; David Chrisley who plays bass and sings harmony vocals; and Steve Chrisley, David’s father, who plays banjo. Crystal Shipley, who plays the fiddle, will join the band for the December jamboree. The group began playing at fiddler’s conventions and then went on to play their own shows and participate in competitions. They placed 9th and 10th at Society for the Preservation of Bluegrass Music in America National Band Championship events in Nashville. They have also appeared on public television’s “Song of the Mountains.”

Presenting a range of traditional dance music and songs from the Virginia Blue Ridge region to bluegrass and country favorites, the New Macedon Rangers’ harmonies and instrumentals capture the essence of a bygone era of American music. Living in Floyd, Va., Ashlee Watkins and Andrew Small regularly perform as a duo at the Floyd Country Store. They often play with a full band for the Country Store’s Friday Night Jamborees and have provided music for performances by the legendary Green Grass Cloggers. The New Macedon Rangers have won both the bluegrass and old-time band contests at the Hoppin’ John Fiddlers’ Convention in Silk Hope, N.C., as well as old-time band competitions at the Fiddler’s Grove Festival in Union Grove, N.C., and at the Tazewell County Fiddlers’ Convention in Virginia. Watkins and Small have been awarded a number of blue ribbons for fiddle, banjo, and folk singing at fiddlers’ conventions throughout Virginia, North Carolina and Tennessee, and Small was named the 2015 Bluegrass Mandolin Champion of Australia. The duo co-founded and coordinate the Dorrigo Old Time Music School as part of Australia’s Dorrigo Folk and Bluegrass Festival.

The doors open at 5 p.m. for the show. Admission is free; however, donations will be accepted to help offset the travel expenses for the musicians. The jamborees are held the second Saturday of each month through April at NRCC, a Crooked Road affiliated venue.

More information about the NRCC Fiddle, Banjo and Dance Club is available from Tim Jones at (540) 674-3625, and online at www.nr.edu/fiddle.