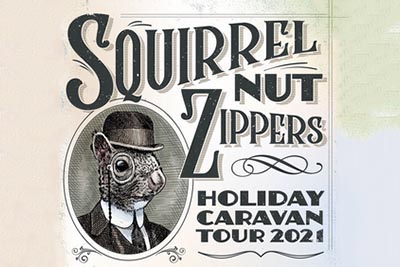 Featuring songs from their Christmas Caravan album as well as classic holiday tunes and even a few SNZ hits, the show promises to be one of the biggest holiday concerts of the season.

SNZ’s released their latest album Lost Songs of Doc Souchon in late 2020. It features 10 brand-new tracks – a combination of newly-penned Zippers songs, along with a few tunes from past times – and has received acclaim from fans and critics alike.

“This new album was inspired by all of the mysterious characters from the history of New Orleans jazz music,” said band leader Jimbo Mathus. “It speaks to the hidden roots of where our aesthetic, interests, and philosophy comes from. It pulls on the hidden thread.”