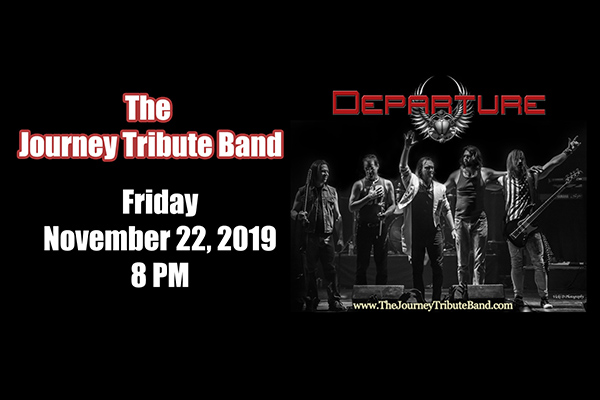 In 2017 DEPARTURE made their first appearance at Pulaski Theatre and brought down the house to an enthusiastic audience. So much so, that we booked them again earlier this year. Once more they were greeted with such excitement that when the opportunity arose to present them again this November, we said “Yes!”

In their 11th year together, DEPARTURE is the most respected Journey tribute band in the nation. DEPARTURE replicates the look, sound and feel of the original 80’s rock super group; Journey. All five DEPARTURE band members are from the original line-up and have been together from the very beginning. These veteran musicians love what they do and have developed an amazing on-stage chemistry. They pride themselves on giving their audience an incredible high-energy, qualitative stage show from start to finish. Dressed in the iconic tuxedo jacket, DEPARTURE lead vocalist, Brian Williams, has an amazing singing voice flawlessly matching Steve Perry’s vocal range and on-stage movements, exactly.

Performing approximately one-hundred shows nationally per year, DEPARTURE brings the very best of Journey to audiences of all ages.
Showtime for this event is 8 pm. Doors will open at 7 pm.

Tickets are $20 in Advance and $25 at the door.
Advance Tickets are available online at PulaskiTheatre.com, at Martin’s Pharmacy in Pulaski and the Pulaski Visitor Center in Dublin.